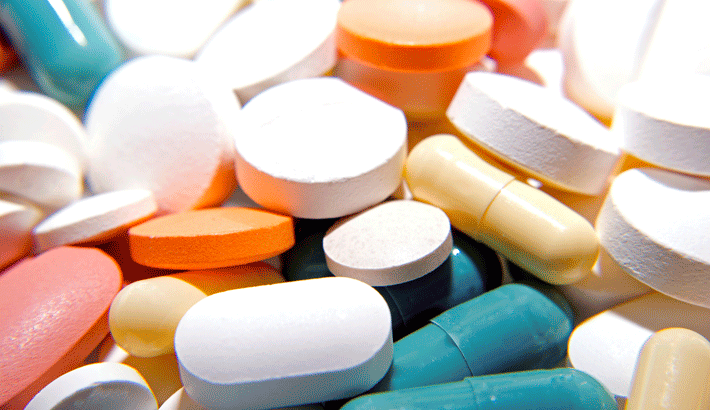 According to DrugAbuse.com, benzodiazepines, commonly referred to as “benzos” were first introduced to the medical community to replace the highly addictive and dangerous drug class known as barbiturates. However, according to the same website, from 1998 to 2008, addiction treatment admissions involving benzodiazepine abuse nearly tripled, reflecting the addictive potential that benzodiazepines also present.

MedicineNet.com describes benzodiazepines as medications that cause mild to severe depression of the nerves within the brain and/or central nervous system, resulting in sedation. Seizures, anxiety, and other diseases may require benzodiazepine treatment because these conditions are believed to be caused by excessive activity of the nerves within the brain, according to the website. 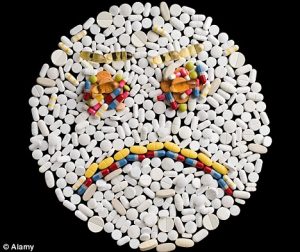 Benzodiazepines are believed to enhance the effects of gamma-aminobutyric acid (GABA) in the brain, which acts as a neurotransmitter, a chemical that nerves in the brain use to send messages to one another. Gamma-aminobutyric acid reduces the activity of these nerves, therefore, enhancing the effect of GABA with a benzodiazepine reduces brain activity in general. MedicineNet cites common medically prescribed uses that may include:

Many people may be more familiar with some of the names of these prescriptions, which include Xanax, Valium, Klonopin, and Librium, to name a few. Drugs.com lists many more uses for the prescribed medications, to include: 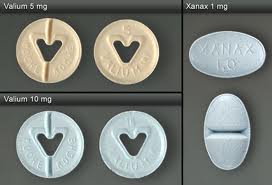 With such varied and common uses, risks of abuse, addiction, withdrawal (as listed above), recreational use and overdose are undeniably something many of us are probably more than familiar with. Whether it be friends, family, schoolmates, or children, drug addiction is on the rise.

WedMD.com states simply, “When people without prescriptions obtain and take these drugs for their sedating effects, use turns into abuse.” Additionally, although more than 2,000 different benzodiazepines have been produced, says WebMD; only about 15 are currently FDA-approved in the United States. They are usually classified only by how long the effects last.

“Benzodiazepines have also been used as a ‘date rape’ drug because they can markedly impair and even abolish functions that normally allow a person to resist or even want to resist sexual aggression or assault. In recent years, the detection and conviction of people involved in this has increased dramatically. The drug is usually added to alcohol-containing drinks or even soft drinks in powder or liquid forms and can be hard to taste.”

Benzo Use On Police Radar

Evidence of the ease of accessibility also grows in the public eye as St John Parish Sheriff’s Office in Louisiana broke a case involving a “million dollar Xanax ring” in 2016, arresting a total of 11 suspects. Officers executed a search warrant around 1:16 p.m. in the 100 block of Oak Fern Court in LaPlace, Louisiana, where detectives found approximately 100,000 Xanax pills, flakka and the packaging for distribution. St John Parish Sheriff Mike Tregre affirmed it is one of the largest drug crackdowns his office has ever been involved in. “If consumed with alcohol, it can have a lethal effect,” Sheriff Mike Tregre said of the drug. According to the Fox8Live.com story, the ring used a computer currency, called bit coins, to sell the drug nationwide, as confirmed by investigators of the case. The FBI was then called in to help out with the landmark drug seizure in St. John Parish. Federal and local authorities are also investigating the use of the digital currency used by the dealers.

Signs and Symptoms of Abuse

A fatal overdose of benzodiazepines alone is extremely rare, says DrugAbuse.com. However, it is estimated that approximately 80% of benzodiazepine abuse involves another substance, particularly opioids and alcohol abuse . According to the site, abusing benzodiazepines with other central nervous system depressants increases the risk of respiratory depression, coma, and death by accidental overdose.

Addiction and treatment specifically for benzodiazepines are unusual as they are generally mixed with other drugs.  Depending on the circumstances and other drugs included, inpatient or outpatient treatment may be needed.

If you, or someone you know is abusing benzos, it may be an indicator of a larger drug abuse problem where inpatient treatment is needed.  Contact a qualified rehabilitation center immediately even if you think someone you love may have a problem.

Don’t let money get in the way of seeking treatment!  There are many tips for save on insurance for rehab. 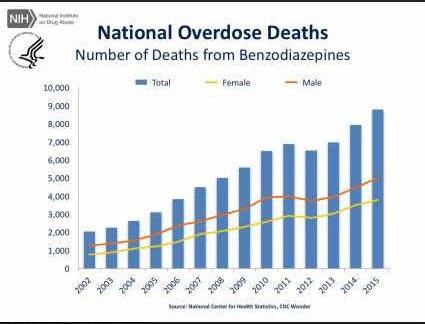 National Overdose Deaths—Number of Deaths from Benzodiazepines. The figure above is a bar chart showing the total number of U.S. overdose deaths involving benzodiazepines from 2002 to 2015.  The chart is overlaid by a line graph showing the number of deaths of females and males. From 2002 to 2015 there was a 4.3-fold increase in the total number of deaths, via National Institute on Drug Abuse.

According to SAMHSA, “HIV, AIDS, and viral hepatitis are important public health concerns for both patients and health professionals in SAMHSA-supported substance use disorder treatment programs. Medication-assisted treatment (MAT) typically involves HIV and hepatitis antibody testing at admission, or a referral for antibody testing. The coexistence of both a mental illness and a substance use disorder is also common among people in MAT. It is important to note that combining medications used in MAT with anxiety treatment medications can be fatal. Types of anxiety treatment medications include derivatives of Benzodiazepine, such as Xanax or valium.”

Availability, alternate currencies, commonality, use in combination with other drugs and alcohol, as well as mental illness all contribute to the alarmingly high lethality rates associated with benzodiazepines.

Xanax Can Be More Addictive Than Herion